Home Horticulture Cabbages: How to get rid of diamondback moth or cabbage moth in... 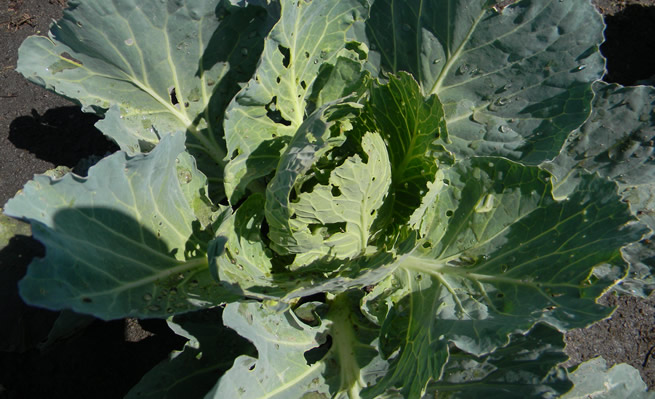 Cabbage is a winter crop, which thrives in cool weather though cabbages are generally consumed all year round. Some cook cabbages as green vegetables and others use cabbages in coleslaw salads and other stylish and traditional dishes. This means, for most farmers, there is always a ready market for cabbages all year round.

As cabbages favour winter over summer, it means growing the crop in summer when it is off-season is more lucrative as there will be less supply of the produce. This sounds good hey, but there is one major problem when one grows cabbages in summer. Pests called diamondback moths produce larvae that feast on your cabbages in summer and if you don't do anything about it you won't harvest anything at all.

It's the larval stage that damages the plants, but the adult stage appears before the larvae are present.

A green larva is predominant in summer because according to the life cycle of most moths, they will be rare in winter due to cold weather. So while it is very possible to grow cabbages in winter without using any pesticides, it is extremely difficult to do so in summer because of this green larva that a diamondback moth or cabbage moth bears.

Diamondback moths are dangerous pests that feed on the leaves of your cabbages and within a few weeks they would have destroyed all plants. The larvae are more dangerous as they feed on cabbage leaves day and night, non stop. If unattended, on a single cabbage you can see more than 15 green larvae feasting on your cabbage.

So to make sure you harvest your cabbages well in summer without suffering any losses at the expense of the cabbage moth, you have two options. You can apply one of the two options or both.

The first one is to use a diamondback moth trap. The trap contains a pheromone insect lure that is used for attracting male cabbage moths. These synthetic pheromone lures are very effective at attracting male moths to traps, which have been designed to capture the moths. The pheromone is placed on top of a sticky surface, which will literally capture all male moths as come for the pheromone. The good thing about this trap is that it stops mating and reproduction of the male and female moths, thereby reducing the population of the pests and ultimately eradicating the larvae that destroy your cabbages.

When the sticky paper gets filled with male moths, you will need to change the paper and put a new one. The pheromone, often referred to as the lure, usually is effective for only 6 weeks. However, this varies with manufacturer, some pheromones have a lifespan of just 4 weeks while others can go for up to 6 weeks.

The second option is to simply use pesticides. Chemicals such as Belt, Thunder, Acephate, Nemesis and Avaunt can be sprayed once a week on your cabbages and they will destroy the larvae and save your cabbages. Ideally, you can use both the trap method and the pesticide method.

ABOUT US
Best Farming Tips strives to help especially new farmers to learn how grow various crops, increase their harvests, build sustainable incomes through farming.
Contact us: farming@bestfarmingtips.com
FOLLOW US